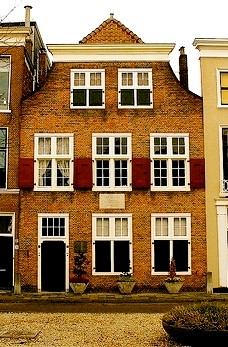 Spinoza relocated to The Hague, presumably sometime after 5 September 1669. Initially, he lodged at the Stille Veerkade. During the 1670s, Spinoza moved to the Paviljoensgracht (just around the corner of the Stille Veerkade ) where he took lodgings in the front room of the house of decorative painter Hendrick van der Spijck (nos 72–74, formerly Burgwal). His room was at the first floor. He died there on 21 February 1677. The house of Van der Spijck still stands today.