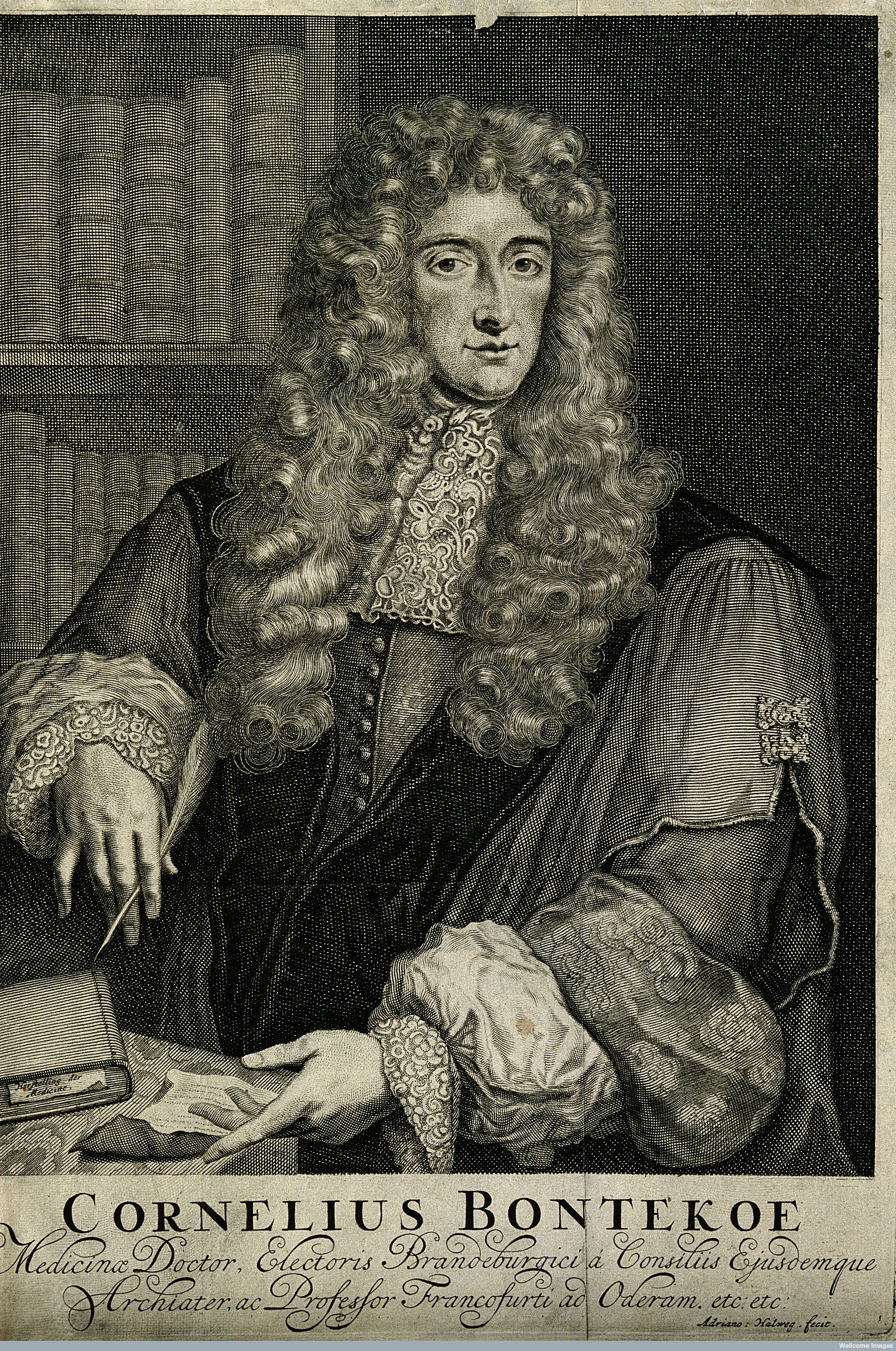 An anonymous pamphlet that ridiculed Bontekoe, "Dialogue van een groote thee en tobacq-suyper (Dialogue of a Fervent Tea and Tobacco Boozer)" states that Bontekoe claimed to have visited Spinoza on his deathbed in 1677. Bontekoe, not specifically an ally of Spinoza (Israel, 2007a, p. 9), took out a doctoral degree in Medicine on gangrene in 1667 at Leiden University. He was censured and ordered (22 January 1675) to refrain from any public opposition to disputations or taking part in other academic exercises. In the firestorm of a new Leiden crisis over Cartesianism, he was finally expelled (December 18) from the university for good. In the previously mentioned Dialogue, the pamphleteer especially ridicules Bontekoe (‘mennoniste Kees’) and presents him as a mere fool, a womaniser, a thief and a fraud who saw tea as a remedy for everything in life. The ‘tobacq-suyper’ also hints at the fiery conduct of Bontekoe in the university. Those events in his personal life notwithstanding, Bontekoe published the ethical system of the Cartesian professor of logics Arnold Geulincx (who had died in 1669). The tireless, militant The Hague physician issued the book in 1675, shortly before or in the same period when Spinoza backed out and postponed printing of his Ethica. For an introduction to the Ethica of Geulincx and his position in ethics: Geulincx, 2006, pp. v–xlii; Aalderink, 1999; Aalderink, 2010, esp. pp. 199–203.

Relations between Bontekoe and Spinoza are unrecorded. It would seem likely, though, that direct or indirect they knew of each other existence. Not only by reputation, but also because Bontekoe ran a chemical laboratory in The Hague. Moreover, in his capacity as town physician, he probably regularly visited the municipal poorhouse of The Hague, the ‘Heilige Geesthofje’ (charity of the Holy Spirit), just accross the house where Spinoza lived and died (Israel, 2007a, p. 9).

To get back to Bontekoe's presumed visit of Spinoza, the pamplet says that when he asked about his last wishes, the philosopher aid to Bontekoe that he did not want to receive any minister or priest:

That he [Bontekoe] once related, how he went to visit Spinoza on his deathbed, and heard from that dying mouth, that when someone proposed to him to have a minister or a papist for his comfort, that he had another comfort. But that, as Doctor Bontekoe remembered, he could not be calmed by the consolations of the common people. In this way, the cow [Bontekoe] tried to become important. But all he is capable off is to circulate slander and lie and degrade Spinoza (who he never understood) into the opposite of a teacher of truth and God’s Church.

Again, no mention is made of any medical treatment of the philosopher. Historical evidence to support the pamphleteer’s account of Bontekoe’s claim is missing. Doubtlessly, the masked author of Dialogue was a declared opponent of the Galenist physician Bontekoe and, probably, also in favour of Spinoza’s philosophical notions. True, it is overall historically uncertain whether Bontekoe was present when Spinoza died. Nevertheless, he was a physician close at hand and there still is the possibility that he was asked to see after the dying philosopher.