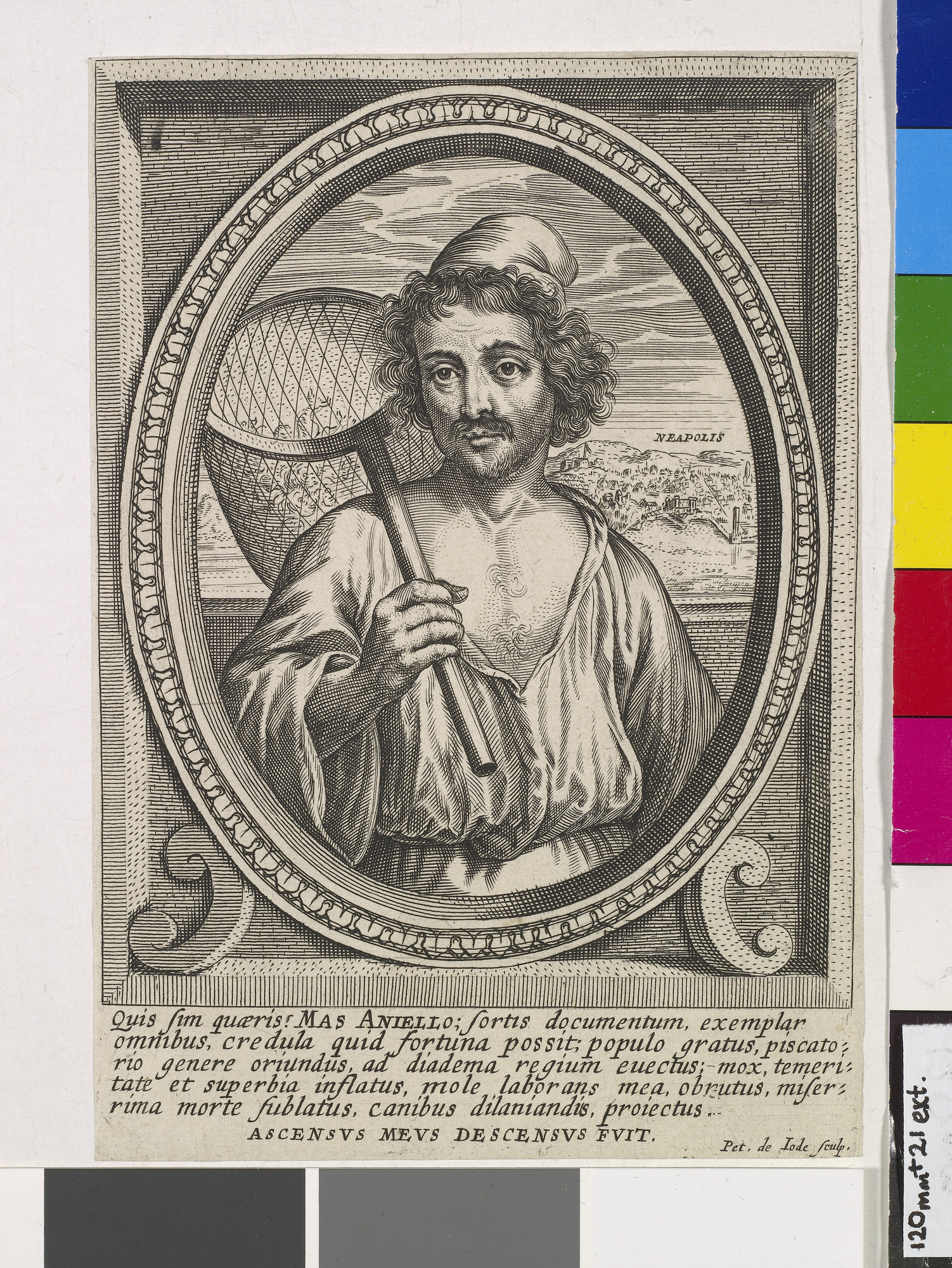 Fisherman Tommaso Aniello (or Masaniello) led an uprising against the Spanish rulers of Naples and the Neapolitan nobility in 1647. See: Coniglio, 1955 (uprising and Aniello); DBI.

According to Colerus, among Spinoza's personal belongings there was a sketchbook containing drawings in ink and charcoal that all depicted ‘several prominent people who were known to him and who occasionally paid him a visit’. Hence, it may be conjectured that most of these drawings were portraits of prominent scholars, magistrates, politicians, diplomats or noblemen. Van der Spijck decided not to put up that book for sale, possibly to keep a personal souvenir of his famous lodger, and treasured the sketchbook for almost thirty years. When Colerus was still busy in composing his Korte, dog waarachtige levensbeschryving van Benedictus de Spinosa (1705), he also looked inspected the sketchbook now unfortunately lost. Colerus describes one of the drawings contained in the manuscript. One sketch on the fourth sheet of it, he maintains, purported to depict an angler in a shirt with a fishnet carrying on his right shoulder. The drawing by Spinoza, according to Colerus, was modelled after ‘historical pictures’, portraying the Neapolitan rebel leader and uneducated fisherman Tommaso Aniello. Moreover, Colerus proceeds, Van der Spijck told him that that sketch was most definitely to be considered as a fine self-portrait of Spinoza. Of course, the remark that the drawing resembled Spinoza physiognomy was an interpretation of how Van der Spijck remembered his famous former lodger. Colerus writes about the drawing:

I have in hands a complete booklet of his draughtsmanship, in which he has depicted several prominent people who were known to him and who occasionally paid him a visit. I see for example on the fourth sheet an angler drawn in a shirt, with a fishnet on his straightened shoulders, just as that notorious Neapolitan rebel leader Tomasso Aniello is portrayed in the historical pictures. Of this [drawing] mr. Hendrick van der Spijck, his last landlord, said that it completely resembled Spinoza and that he undoubtedly had designed it after his own face. About other prominent people depicted [in the sketchbook] I will keep silent for obvious reasons.