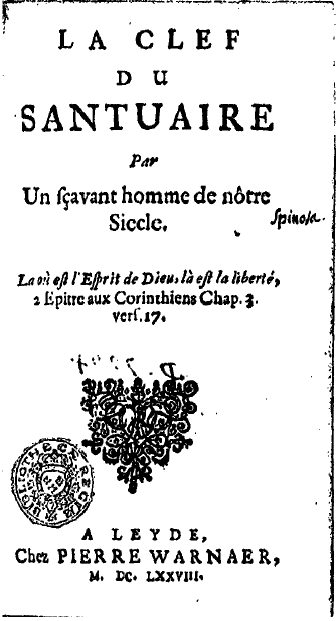 After many deliberations the States of Holland, Zeeland and West-Friesland suppressed Spinoza’s posthumous works in an official placard on 25 June 1678. On 4 November, the Vroedschap of Utrecht followed suit and prohibited not only the posthumous writings, but also Tractatus theologico-politicus which had already been banned by the provincial High Court of Holland in July 1674. Nonetheless, despite these political measures, the seemingly popular ‘Theological-Political Treatise’ was still laid up again in 1678. This time, now, the book appeared in a translation for a French-speaking audience, again with bogus title pages and false imprints. Most significantly, this translation, issued in two duodecimo editions—commonly referred to in Spinoza scholarship as X and Y—was issued in seven variants states with a total of eight entirely different title pages. The importance of the X and Y edition, albeit its very few corrections evidently a corrected print run, lays in the fact that the printed translation is set together with the majority (thirty-one out of total of thirty-nine) of what has become known as the so-called Adnotationes. The addition concerns Spinoza’s own supplementary notes to the book to fill in the voids of the work and to remove hostile prejudices conceived against it by readers. Since the fall of 1675, he had already given deep consideration in his exchange with Henry Oldenburg to the idea to issue a new edition of his treatise with such explanatory remarks. The French translation, presumably launched on a further unknown date in 1678 by the Amsterdam bookseller and publisher Jan Rieuwertsz Sr, is generally attributed to the French Huguenot author and publicist Gabriel de Saint Glen (also spelled out as Saint Glain, Ceinglen, Ceinglein or Saint-Guislain).

All variants of his translation were basically issued under the following three spurious titles: Reflexions curieuses d’un esprit des-interressé sur les matieres les plus importantes au salut, tant public que particulier (Curious Reflexions of a Disinterested Spirit on the Most Important Matters of Salvation, both Public and Private), La Clef du san(c)tuaire par un sçavant homme de nôtre siecle (The Key of the Sanctuary by a Man of this Century) and Traitté des ceremonies superstitieuses des Juifs tant anciens que modernes (Treatise of Superstitious Ceremonies of the Jews, both Ancient and Modern).

It is virtually certain that edition X preceded edition Y, which also seems to have been the ‘luxury’ edition of the two print runs. Their sequence becomes apparent from a few revisions in Y.

French. Explanatory footnotes, keyed with typographical symbols (italics), notes and references to Bible passages in external margins (italics). Larger portion of the Preface and list of contents (partly) in italics.